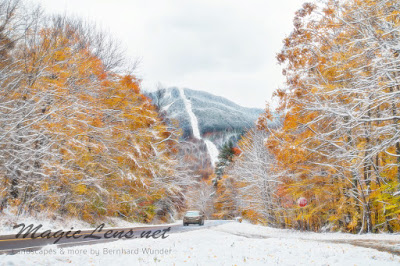 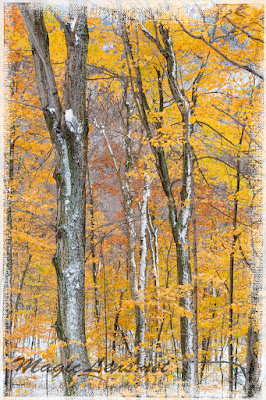 Still experimenting to find the right settings of LR/Blog export plugin, but I am getting there... This post shows two images from late October when we drove up Smugglers Notch for a short walk. The first snow made for a beautiful contrast to the yellow/orange leaves at that altitude.
Posted by Almechd at 2:54 AM No comments: 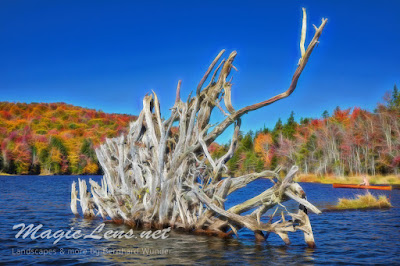 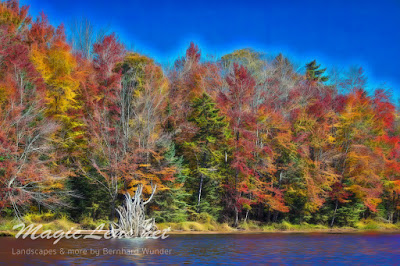 The photos above have been taken on Green River Reservoir last fall. We had the luck of hitting peak foliage season there with perfect weather for the last three years now. Again, this is my "old postcard" look achieved with Topaz "Glow".

I have to write a bit more about Lightroom: I am really positively surprised by that tool. I still find the Library/Development module a bit more clunky than the Apple Aperture solution, but once you get used to it, working with it is just as easy. So far, I have been reading just one book on the tool, but there are countless videos on YouTube that not only explain the mechanics, but also give great advice on workflow. You can find some cool plugins (like this LR/Blog for posting photos to a blog). The only one I am missing from the Aperture world is "Border FX". Of course, you can do all these things with Photoshop, but I prefer simple, intuitive solutions.
Posted by Almechd at 2:35 AM No comments:

Moss Glen Falls and my Switch to Adobe Lightroom 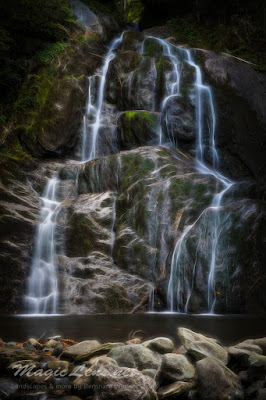 This is the Moss Glen Falls along VT100 between Warren and Granville (there is another one north of Stowe). I am not sure how often I have taken photos of this place, but this one is (a) taken with my shiny new camera (Canon 5D Mark IV) as well as (b) developed with Adobe Lightroom (and again, a pinch of Topaz Glow).

After many years of using Apple's Aperture (I was one of the first adopters), I finally made the switch to Lightroom. It took a while to convince me, still hoping for Apple to turn the corner and make their "Photos" app into something meaningful after they gave up on Aperture a while ago. I loved the Aperture interface, and had so far not warmed up to Lightroom during initial trials. But after reading Jason Bradley's book and watching Thomas' use of the tool, I gave it a serious second chance and quickly got the hang of it. Long story short: Since August 2016, all my photos are managed and developed by Lightroom. And I believe the quality of results has improved quite a bit with that move.

I still have not decided how to handle my many photos, hidden inside Aperture's database. But I will keep my old Mac Mini at the last OS version that officially supports Aperture for the time being. More on my new computer hardware in a future post.
Posted by Almechd at 2:13 PM No comments: 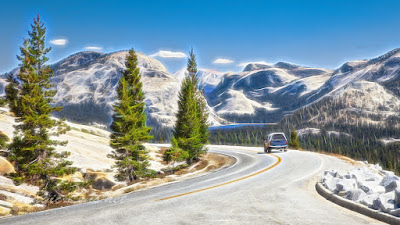 This is one of my favorite spots on Tioga Road through Yosemite National Park: The view towards Tenaya Lake. I went to California in August 2016 and took a trip to the Eastern Sierra with Thomas. This shot was taken on the way from the Bay Area to Mammoth Lake where we spent the first night.

The effect on this image has been accomplished with my go-to tool, Topaz Labs "Glow". I developed my own preset which I call "Old Postcard Look". I am sure you will see more photos developed with it...
Posted by Almechd at 1:51 PM No comments: 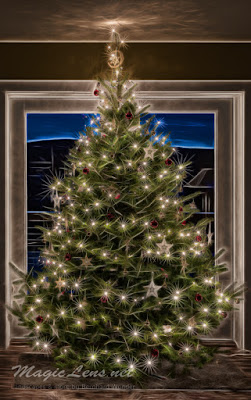 As I am still experimenting with how to best publish/showcase some of my photos, I have started and then stopped this blog. Now I have decided to give it another try. I am not really ready to hand off the copyrights of all my hard work to Facebook, Flickr and the like.

Suiting the time of the year, I'll start with this photo that shows our own tree this year. A lot has happened and I plan to write about that later and also post older photos in the future. Keep coming back!
Posted by Almechd at 1:32 PM No comments: